A new Star Wars: Legion league started up a few weeks ago at Game Kastle here in Sacramento using the skirmish rules and a reduced points limit.  My Imperial troops have engaged Rebel forces twice now, losing the first match while winning the second.

Posted by Richard Barnes at 5:09 PM No comments:

Last year I seemed a bit lost game-wise, as Flames of War was played less as V4 has struggled to find a footing in the NorCal area and the meta shift on the national level left me cold.  Strangely though, I seemed to get quite a bit of new units painted in the first half of the year before commission work made me put my own projects back on the shelf for a time.  I also reached out and picked up several new games, such as Star Wars: Legion, BattleTech, and the Harry Potter Miniature Adventure Game, though I've only had a chance to play the first of those.  Conventions were attended in Nevada and here in California, West Coast Nationals in Las Vegas, Gauntlet here in Sacramento, and KublaCon and Pacificon in the Bay Area.  Several smaller events were held locally, though most of these were more casual than in the past.  I got into Legion on the recommendation of some good friends, and even played a few games of X-Wing.  I also managed to paint quite a few minis!


Had I not decided to get into Legion, I would've made my goal of painting more than I bought.  Oh well. 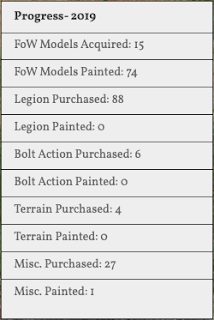 I still have a few commission items to finish before I get to try my hand at painting Stormtroopers!

Posted by Richard Barnes at 1:07 AM No comments:

We had a small Early War event last week at Game Kastle here in Sacramento and decided on 1350 points.  I brought a Panzerschützen force from Hellfire and Back.

Game One I played against Hal and his Italian Fucilieri.  The Mission was Breakout.


If Hal had come forward early he would've won big, but he kept a unit of five tanks back to defend against my reserves, and never used his second infantry unit.  8-1 win for me.

In the second game I defended in Bridgehead against Russ and his British Infantry Tank Company of Matildas.

It was nice to have an event in Sac again, even if it was the unsupported Early War.  Still was good to get together!

Posted by Richard Barnes at 5:43 PM No comments:

Johnny and I got together at the new Game Kastle store here in Sacramento to try and re-establish a FoW presence in town.  We decided to go for 80 points and I wanted to try out the newish Fallschirmjäger list from the D-Day German book. 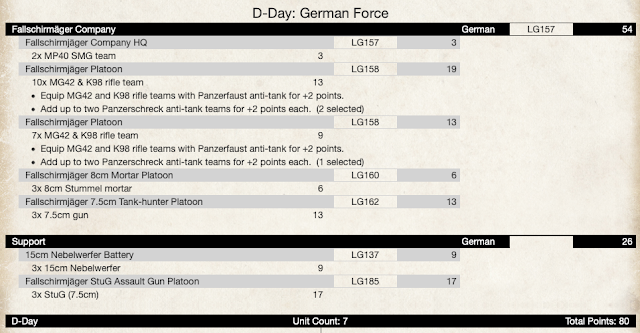 We played Dust Up and Johnny had a US Armored Company.

Johnny won this one, a 2-7 loss for me.  He lost the recon and a unit of Shermans, I lost the PaK40s.  I needed more AT shots against so many Shermans.

Posted by Richard Barnes at 7:11 PM No comments: