So, I entered my Cassino FJ objective into the Wargames Illustrated painting competition at Historicon last weekend.  Since they were handing out three placings in each category I figured I'd enter it just in case I won something.  There were 130 great entries in 10 different categories from fantasy to historical and there were two specific Flames of War categories: Objective and Platoon.  Ultimately I won first place for Objective and surprisingly took home the Iron Cross award for Best Flames of War entry against some very awesome competing entries.  Thank you to Dave Taylor, John Matthews and all of the other judges and congratulations to the other winners.  The Königstigers from Michael Jacques were amazing and won Best of Show.
Link to WI web article:
http://www.wargamesillustrated.net/Default.aspx?tabid=221&art_id=4042 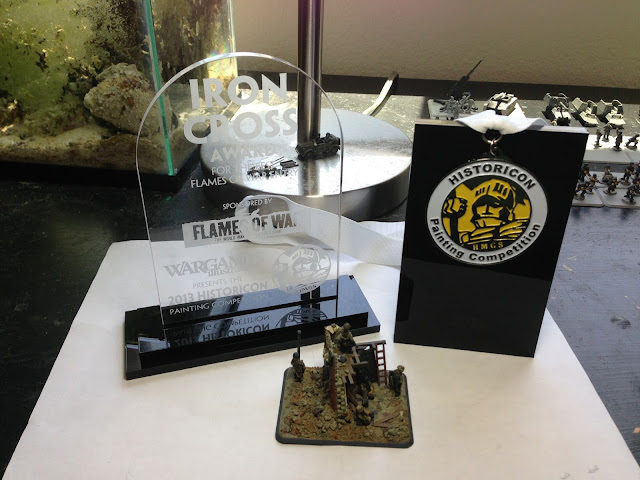 Some great looking armies at Historicon

Thought I'd post some of the nicer armies I saw at the Nationals.  I wasn't able to get as many shots as I wanted because it was rather unclear to most of the players when we should even lay our armies out.  Next year I hope they have a set time for display instead of just having us put them out during lunch.  We had two days to go look at these but many players didn't even know we were supposed to put them out and many didn't have a name with them.  I never saw Todd Sunday's excellent SS Panzergrenadiers until I played him in the last round.  Display boards also seem to give a huge advantage.  Players who wanted to compete for the Best Presentation award got lost among the more than 50 tables if they didn't have a large display to attract attention.  Todd thought that maybe next year they should have anyone who wanted to compete for the award lay out their army at a set time and without any huge display board as anyone travelling by air couldn't possibly have something like this and would be at a disadvantage.  I tend to agree.

The doubles event was a ton of fun but the main event for the weekend was the Nationals tournament, 1780 Late War.  I brought the fortified Cassino FJs hoping to turn the US infantry lists around and make them attack me.  Best laid plans and all that...  Having said that, I faced zero US lists in six rounds fighting Soviet, Finnish, German, British, British and another German list.

Round One was over so fast I didn't get any pictures.  Encounter against Soviets.  31 T-34/76s came screaming at me before any reserves arrived and quickly put me out of my misery... 1-6.
Round Two was Cauldron vs. an Allied Finnish infantry list supported by heavy artillery, Panzer IVs, T-34/85s and AA.  My opponents random deployment really hurt him as his Heavy Artillery were forced to deploy in the open quarter opposite of any support.  When my reserves finally showed up they were in a good position to do some damage.  5-2 for me.
Round Three was against Dennis ' beautiful 21. Panzergrenadiers and a pile of french funnies in Pincer.  The first turn really hurt the panzergrenadiers and the Stugs coming from reserve could have really done some damage to the lightly armored Buetes so the advance was stalled until they arrived.  When they arrived they were able to finish off the panzergrenadiers while the FJs in reserve cut off the Buete Stugs.  6-1 for me against a very great opponent with an awesome army.

I was able to salvage the rest of day one ending with 12 points.  Could I just maybe crawl back into contention?

Round Four was Counterattack against some Night Assaulting British Paras supported by a crazy amount of guns.  The FJs moved to secure the open objective but were quickly pinned down by artillery.  They were never able to unpin and were hammered mercilessly by artillery before getting assaulted by some engineers.  Stugs were unable to get into position to contest and I lost 1-6.
Round Five was against Ben and his pizza box of hard hitting artillery in Hold the Line.  I thought I'd be clever and ambush both infantry platoons but the forgotten about AOP prevented them from starting near the objective.  Huge templates crushed my hopes and my FJs.  Another 1-6 for me.
Round Six was Free For All against another expertly painted army, Todd's SS Panzergrenadiers.  He had some Sturmtigers, Jagdpanzer IV/70s and some flame Hetzers all charging at one flank while I tried to get my FJs across to his.  Speed lies with armor (even slow armor) and he kicked me off of mine before I could do any real damage on his sid eof the board.  Another 1-6.

To answer my previous question, NO, I could not even get a point, haha.  Day two was by far the worst day points wise that I have ever had playing Flames of War but I have to say I still had a fantastic time and all of my opponents were great guys.  I'm not sure if I'll make it back to Historicon next year but I think I'll definately try.

I'll break this up into two postings since there's quite a bit to cover.  This was the first time I've been to Historicon or any large convention for Flames of War back east and I had a great time.  We flew in wednesday night before the convention and Steve from WWPD let Riha and I crash on his couch before chauffeuring us up to the convention the next morning.  Thanks Steve for showing us around all weekend!

Thursday was the I-95 doubles tournament and Riha and I paired up.  He ran the Fearless Trained SS Schwerer Panzers from Kampgruppe Pieper and I had a list of Cassino Fallschirmjager.  He had 1iC and 2iC King Tigers and a platoon of two King Tigers for a one platoon company while I had two platoons of FJ with attatched HMGs and panzershreks and a platoon of Nebelwerfers.

We ulimately faced quite a few US lists, all of our opponents teams had a 2 ID list supported by tanks.  6-1, 5-2, 6-1 and first place in the doubles event!  We really did not expect to pull out a victory but King Tiger backed up by large FJ platoons held the day.

Posted by Richard Barnes at 4:51 PM No comments:

Finished this up tonight, it's been a lot of work but I think it was worth it.  I started out with the old Soviet HQ objective from Battefront and wanted to use the great FJ tank rider figures that came with the new King Tiger model.  Ultimately I was unhappy with the objective as-is and broke it up and only used the wall section, gluing it to another base.  I used some other wall bits to add a second floor and things kind of took off from there.  I spackled in the gaps and used balsa to build a floor structure.  Made a plank floor upper story and stone tile for the ground level.  Rubble and a few odds and ends to make a street corner house that the FJs are using as a temporary resting spot and observation post.  I really love how this came out and look forward to entering it in the Wargames Illustrated Iron Cross competition at Historicon next weekend. 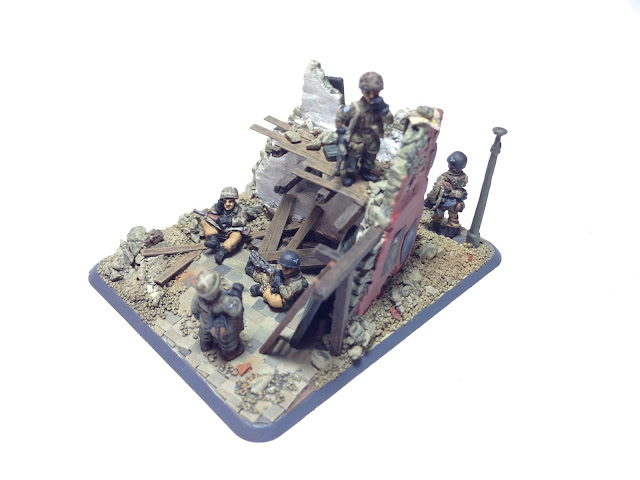 Finally finished my first Objective for the Cassino FJs.  I used the hero sculpt for the Oberst Gosewisch staff team as a basis and added a few other things to turn it into a truck supporting some pioniers building fortifications. 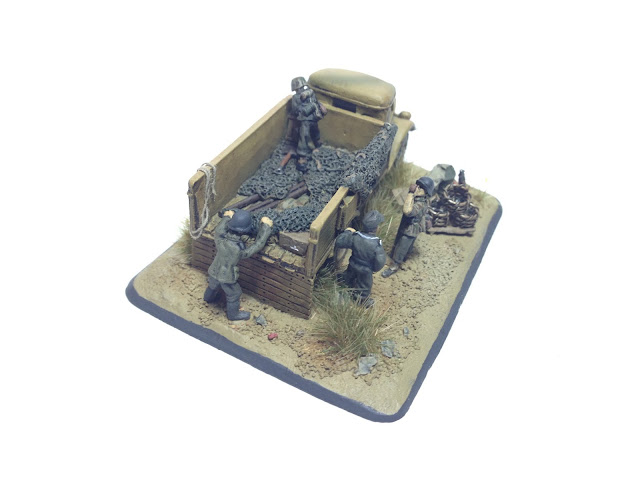 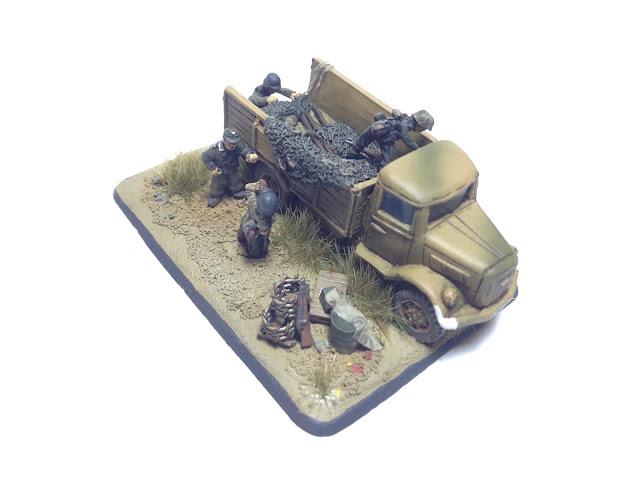 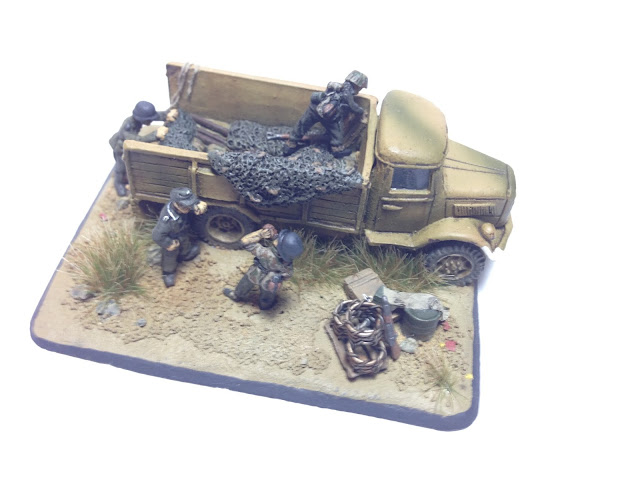 Posted by Richard Barnes at 1:11 AM No comments:

Last night Riha and I played a quick (too quick) game of Cauldron and web-cast it on WWPD.  He ran Reno's list of Soviet Light SP Artillery and I took my Cassino FJ's.  These are the lists we're taking to Historicon and we thought we'd practice a bit.  Riha is borrowing Reno's minis for the event and figured he should at least play with them once before Nationals.

This game was very short, we only played five rounds before my company failed its 2+ morale test.  I managed to kill one platoon, but that was the only damage done.  Riha's reserves were all in by Turn Two, while mine never showed.  Had I remembered anything about this mission I would not have deployed the Nebelwerfers and probably should have elected to defend the other side of the board so the Marders could have had somewhere to hide.  Lesson learned!!  Let's just hope I don't match up vs. Riha or his Breakthrough Guns at Historicon.