Last saturday we had our first circuit event of the year at Gamescape North in San Rafael, CA.  This is one of the premiere game stores in northern California and is run by a bunch of great guys.  The event was an Escalation style tournament, Late War, with points totals of 1280, 1530, and 1780.  I decided to be lazy and build my army from stuff I already had painted and kinda suffered for it.  Ended up somewhere in the middle.  We maxed out our table space with twenty-four players and two alternates, though two guys had to cancel the morning of.  We even had three players from out of state register, one all the way from Florida.  Eric Riha ended up winning the event but passed on prize support.  Dave Ripperda took second and Russ Moore won Best Presentation.  I had fun in all three of my games and can't wait until next months event!
I wasn't able to get any more pictures of the games, My camera battery was dead.  But I did play Dave Ripperda in Round Three with his Allied Finnish.  Dave beat me 5-2 in Breakthrough.

Before we started the 2013 tournament season we had our awards ceremony for 2012.  Lots of great awards for lots of great players.  Had some other pics of other winners, but they didn't come out right.

Posted by Richard Barnes at 12:42 PM No comments:

Email ThisBlogThis!Share to TwitterShare to FacebookShare to Pinterest
Labels: Flames of War, Hobby

Little help painting the other day

I had some help the other day while painting my new Fallschirmjager... 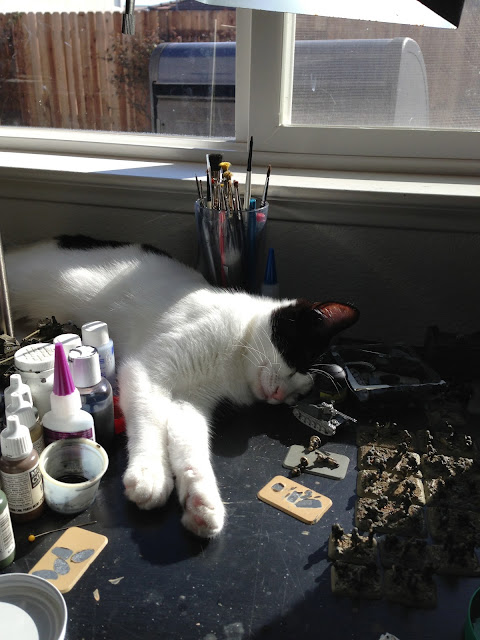 Posted by Richard Barnes at 12:23 PM No comments:

Email ThisBlogThis!Share to TwitterShare to FacebookShare to Pinterest
Labels: Hobby

Had another great game with Reno a little while ago to practice for the NorCal circuit February event.  Reno had a late start and didn't get to my house until around 10 pm, so we decided to play a lower points level at 1280.  I ran Grenadiers from Grey Wolf and he had Soviet Light Self propelled artillery.
Mission we rolled up was Counter Assault with his Mech list attacking.

Finally finished some Marder III Ms for a Late War Grenadier list.  Decided to match the winter theme that most of my Late War germans follow, mostly because I'm too lazy to paint new infantry, hehe.

Posted by Richard Barnes at 7:12 PM No comments:

Had another game with The Riha this week, decided to mix it up a bit.  I've been playing the Cassino FJs for a few months now and wanted to try out something different.  I put together a list of Grenadiers from Grey Wolf to practice for an upcoming tournament. (NorCal 2013 event numero uno)
My list was:
HQ with Windguber 2ic upgrade, CiC faust and shrek, 2x Grenadier platoons with fausts, Scouts,      4x Marder IIIM, 3x 5cm Pak 38s, 4x Stugs, 15cm artillery battery, 2x 8cm mortars, 2x MG42 (attatched out), and a looted T-34/76.  Nine platoons of fun!  Riha ran the same 101st Airborne fan-boi list with 2 bulked up platoons, 2 Hellcat platoons, Recon patrol and a pair of medium mortars.
We played Counter-attack with Riha attacking.  I deployed my Grens in the corner with the fields and we both had to get to the open objective, but Riha couldn't capture until turn 6.  There was a series of bloody assaults up the middle by his Airborne, supported by both of the TD security sections and the Recon too while his other Airborne platoon tried to get through the town and to the objective.  Luckily for me my Stugs and Looted T-34 were able to catch them in the open and kept them away from the objective.  His assault up the middle did cost me the Pak platoon, a Grenadier platoon, most of my 15cm artillery battery and my CiC before Windgruber was able to lead the Scout platoon back into the crops to finish the now battered Airborne off.  They were also assisted by a rather lucky one-gun mortar bombardment that killed 4 stands!  The game was very close from start to finish and my Marder platoon ambush worked super well.  4 hits, 4 kills on a TD platoon.  The Scouts (assisted by Windgruber) were ultimately the Heros of the game though, killing an Airborne platoon, and a Security Section in two separate asaults, while securing the objective long enough for the Stugs and Marders to break his company.  The game went about 8 turns before I got his company to break, 4-3 for me!


Posted by Richard Barnes at 12:54 AM No comments: