First off, I'd like to thank Battlefront for all of the attention they've directed at this blog.  I had no idea they were going to put direct links to my Historicon reports on their front page.  Thanks also to the readers I was able to talk to out in Virginia.  It was really nice to meet you.  I had a great time and I'm sure I'll make the trek again next year.

I got off pretty easy at the swap meet and vendor hall, mostly thanks to this challenge.  I spent a total of $35, mostly on stuff for Flames of War.  I spent my first joker at the swap meet though, as someone had a bunch of old OOP Battlefront vehicles for sale and I grabbed three GMC 2.5 ton trucks for a future 150. Panzerbrigade list.  Sneaky Germans using US equipment should be a fun modeling opportunity.  I also got an opened blister of 10cm NW40 heavy mortars for my Mid War Luftwaffe Feldkompanie, just need to find one more gun for the battery.  $22 spent.  I bought nine bags of bits and three sheets of decals for a total of $13, and scored a special Soviet objective and a unique figure just for attending.  I've already sold the objective for $20 to a local guy, and made most of my money back!  On to the update!

I finally got some paint on these models for friendly X-Wing games.  I bought some old model kits and a few old Micro Machine toys months ago to bash into some different ships, built them awhile back and left them sitting since.  To break the Flames of War routine, I decided to break them out.  First, I airbrushed the Imperial ship and satellite Tamiya Sky Grey, they added some White for two Rebellion ships.  The Scum ship is a red-brown color I had pre-mixed.  After that, I painted in the canopies and added a few spots of detail.  I only spent a minimum of time with this, as these are pretty low on my gaming priority.  I haven't played X-Wing in over six months.  After the paint was dry, I used a MIG Light Grey wash, sprayed on some varnish, and called them done.  I got these painted up over about two days, they came together very quickly.

That's five Star Wars models removed from the mountain, and seven Flames of War minis added to the pile.  I also spent my first joker.

For the third year in a row, Wargames Illustrated and HMGS came together to host the Historicon Painting Competition.  Each year the event grows larger, with more entries in more varied genres.  Pictures of each categories winner were recently posted on the WI website, and they'll have full results in an upcoming issue of their magazine.  I wanted to share some of my favorites, with pictures from their website.  Jessica Rich again had some fantastic entries, this time winning in two categories, and taking Best in Show as well.  My FlaK Crew Objective won Best of Flames of War, my third Iron Cross in three years.  There were some fabulous Flames of War entries this year, and some other models were just as deserving.

Here are some of my favorites:

In previous years, the painting competition portion of Nationals has been a bit of an afterthought, with everyone's armies laid out on the game tables during lunch.  With over 100 players at some past events those tables would get crowded and many nice looking armies would get overlooked as some players might check out a few that were easy to access, but would quickly move on to get a sandwich or hit the vendor hall.  This year Battlefront had anyone who was interested in competing display their army off to the side on some extra tables.  I think that was an excellent idea, as anyone who wanted to participate could quickly put their armies out and those who wished to look at them could see all of them in one location, while only needing to use a few minutes of their precious lunch break.

This year there were some excellent entries, with the Japanese armies earning the top three spots.  Mike Richards' Kihei Chutai would deservedly take Best Painted.

Posted by Richard Barnes at 10:12 AM No comments:

I had more fun this year at Nationals than I've ever had.  Battlefront had a crew of two which helped quite a bit, and the smaller attendance of 52 players made the event run pretty smooth over all.  Early War has never been my favorite period of play, though I did find myself enjoying each of my six rounds.  I think that may be because I didn't try to take a 'competetive' list this year, preferring to go with something that would rely heavily on platoons I already had painted, as time and energy were both pretty limited.  At no time did I stress about points or worry about rankings.  In fact, when I faced the Battlefront ringer in the second round he readily admitted that he had only played a few games, and said that this would be an easy victory for me.  His list also had a significant weakness against my force, all of his tanks had No-HE and I could have just sat there.  Instead, since I felt no pressure to win anything, I used the game as a teaching experience, eventually losing 2-5 as his Stuart tanks danced all over the board.  The tables were solid as always, with a variety of desert and rural boards, though there is room to improve them if they choose to do so.  This was the list I took: 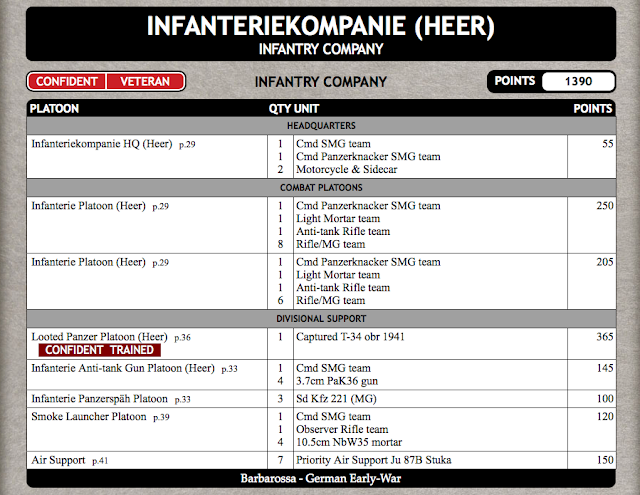 Round One I was matched up against Chris and his German Light Panzer Company.  His force was primary made of Panzer IIs and the mission was Encounter.


2-5 loss as Chris took the lightly defended objective on the left side.  Had the T-34 made it to the woods, I could have perhaps scored another point, but I just didn't have anything on the other side to hold the objective.

In the second round I had the opportunity to play Tim from Battlefront in Cauldron.  He had a British force made up entirely of 'Honey' Stuart tanks.  There was a good chance that I could've hunkered down on the objectives and waited out the win, but where's the fun in that?

Tim's tanks were so fast they could effectively hide from the T-34 and PaKs, while the tanks that came in from reserve were in perfect spots to attack my reserves as they came in.  The swarm of Stuarts hitting the T-34 on the flank was awesome and it only took one failed check to get it.  His AA MGs also shot down several Stukas.  2-5 loss to the Battlefront ringer, this was a fun game and I'm glad I could help him learn a few things about the game.

Round Three would see me matched up against another German panzer army, this time made up of Panzer IIIs.  Mark and I would play a Fighting Withdrawl on a desert board with me defending.

This game only lasted about four turns, the Panzer IIIs all were destroyed in a single turn.  He managed to kill the T-34 with his 88s and I won 5-2.

After the first day I had nine points, a pretty terrible showing, but no worries.  I knew this list was not a real winner and played like it.  This game can be much more fun when you aren't desperate for the win.
Round Four I would battle Temis and his Soviet Red Banner Strelkovy in Hasty Attack, with him attacking.  Temis had two large Strelk mobs, two platoons of anti-tank guns, heavy mortars, and a dreaded KV-1.

Those armored cars were the shining heros of this game.  Because of the need to defend his objective, they delayed Temis from bringing his second strelk on the board for three turns, then were able to fall back to support the lightly defended objective of mine in time to stop the assault cold.  Temis used his KV-1 to threaten the other objective and may have been able to do smoe more damage there, but I had two panzerknackers and an ATR there.  6-1 win for me.

Two wins and two losses, a total of 15 points so far.  I headed into Round Five versus William and his Polish tank company.  I would be defending in Hold the Line.

Well, that's what I get for never having played the Polish before!  His bypassed platoon worked perfectly, and I had nowhere to go.  Well played by William, a 1-6 loss for me.  That was a fast game, but it gave me plenty of time for the swap meet and vendor hall!

The final round of the event saw my troops matched up against Mike's gorgeous Japanese cavalry force in Dust Up.  Mike deservedly won Best Painted.

Oh man that game was a blast!  Mike finally got to pull off his cavalry charge, apparently he had been fighting tanks all event.  1-6 loss to a fantastic opponent with a beautiful army.

At the end I had two wins and four losses, a total of 17 points.  Even though this was my worst major event by scoring, I had the most fun out of any of them.  All of my opponents were great guys and even though some of the games were blow-outs, I still had a chance in each one.  The top three players ended up tied and it came down to a third tie-breaker, opponents total points.  Top lists were French Infantry, Soviet Infantry, and Romanian Infantry.  Thanks to Battlefront for putting on a well-run event!