Saturday I made the trip up to Albuquerque for an eight man Late War event and decided to bring a variation of the Fallschirmjäger list I took to Kublacon last year.  I figured two platoons of FV Fallschimjägers backed by two platoons of Marders would do pretty well again.  Here's the list I brought: 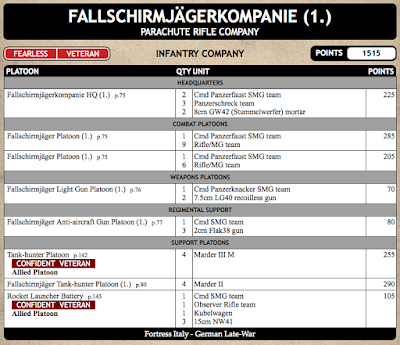 In the first round I was matched up against Derrick and his Gurkha Rifle Company and I'd be attacking him in Hold the Line on a pretty barren desert table.

Derrick would lose three platoons while I lost five (both FJs, both Marders, and the mortars) giving me a 3-4 loss.  Tough game and closer than I thought it would be towards the end!

In the second round I would play Ryan, a pretty new player who was running the US Task Force Alpha list.  I knew it could be pretty tough to face but also knew it was hard to run.  The mission would be Hasty Attack and I would be defending.

I would win this round 5-2, losing the Marder IIIs to a combination of Hellcats, artillery, and the 2iC's M8 armored car, but I had two platoons (2cm FlaK and LG40s) down to their command team and making a few Sole Survior checks.

My final match was against Vince and his Schwere Panzerkompanie in a Free For All.

Vince would win this one pretty convincingly, I managed to kill his 1iC tank and Motorcycle Scouts, but he would take my objective.  2-5 loss after a long day of gaming.

The Marders were a total let-down, and my Fearless troops were pretty disappointing all day.  A platoon of StuGs instead of the Marders would've made a world of difference.  I still wound up in third place due to soft scores and took home $10 in store credit and had fun in all three games.  Thanks to all three of my opponents!

What can I say except that I'm glad 2016 is over.  It's been a busy 12 months and hobby time has been pretty slim.  I did find the time to play 21 games in total, down a little from last year, including large events in California and Arizona, and some smaller ones in New Mexico and Texas.  A new Flames of War venue in El Paso has helped establish a new gaming community of about a dozen players since last year, and its continuing to grow.  Here's to a renewed sense of hobby purpose in 2017!

I didn't get much painted for myself in 2016, but I did get one commission finished and delivered and another is very close to completion (Sam, I'm almost there, promise.)


I made trips to Kublacon in California and Shifting Sands in Arizona, too. 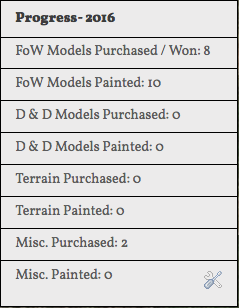 Shifting Sands is in a few weeks and I'll be trying my hand at Team Yankee for the first time.  Kublacon is in May and I plan on flying back for that, too.  I might even convince the wife to let me go to one more Historicon as well.  Happy hobbying everyone!