Last weekend NorCal hosted a small Early War event at Outflank Games in Fairfield.  At 1250 points, the armies were small, and since a number of us were still learning V4, we only played two rounds.  I brought a German Infanteriekompanie from Barbarossa. 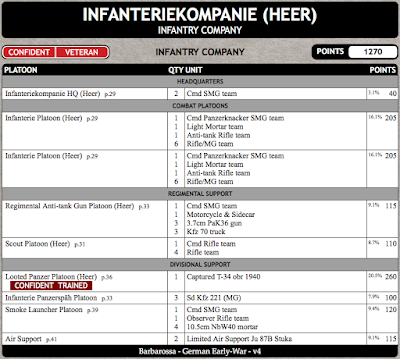 After the game with Hal a few days ago, I decided to swap the expensive StuGs for a few more cheaper platoons, but was kind of limited by what I have painted for Early War.  In the first round I'd be playing Russ and his British Infantry Tank company in Dust Up.

I won 6-3, after losing my armored cars, an infantry platoon, and the mortars, but had Russ taken out the handful of infantry stands I still had, he would've broken my company.  My only hope was to win an assault and have him get stuck in the river, which miraculously happened.  The heavy mortars and one good air strike were able to take out his Rifles pretty early, but the Stukas were pretty disappointing.  The T-34 also never made a firepower check.

In round two I would be facing Brad and his Soviet Tankovy Batalon in No Retreat.

I would win this one 8-1, but only because of some really bad dice rolls by Brad's conscript tanks.  They would charge in to assault, miss all of their attacks, and then lose one or two to poor armor saves before falling back.

Thanks to Russ for running this small event, hopefully most of us learned something about V4!

An old friend of mine, Hal, and I met up for a practice game before this weekend's Early War tournament and played a quick game of Encounter.  Hal ran a Greek Etaireia Pezikoy, or rifle company, and I ran German Infanteriekompanie.  1250 points won't get you much, and Delayed Scattered Reserves wouldn't help either of us!

Hal would claim a 8-1 victory on Turn Four, neither of us getting any reserves.  It really pays to be aggressive in V4, especially early in the game.