Man, what a strange year!  I was able to paint a bunch of minis during the first half of the year, but all of them were for other people.  Pre-shutdown I managed to get a single game of Flames of War in, and a handful of other games before March.  I only purchased a few units for Legion, and added a few scale aircraft to my stash, but sold a ton of 28mm D&D minis and some other random bits from my mountain.  That's one way to reduce the pile of unpainted minis I guess, just not as much fun.  I also picked up some Transformers minis from WizKids, but there's no game for me to use them in.  Maybe 2021 will see an eventual return to normal gaming, but I don't see that happening before summer.  I find it hard to paint anything without an event on the horizon to use them in.

I managed to reduce my mountain of unpainted miniatures and also painted more than I bought, even if I didn't get to keep any of them!  I painted 74 models, sold 113 more, and only bought a few things here and there, for a total difference of -175. 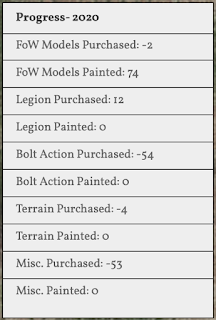 Posted by Richard Barnes at 6:05 PM