Finally, there was a (limited) return to the tabletop!  2021 was another year of high expectations that ultimately got away from me.  Kids and other family commitments kept me from much hobbying, and without any large or consistent events, it's always tough for me to find any motivation.  I did, however, find a bunch of Flames of War models, either by way of gifts, prizes, or a late-year surge in army-building interest!  I initially planned on attending Nationals at LVO in 2022, and bought some minis to complete a Panzer IV force, but those plans have now changed.

I only managed to play seven games of Flames of War all year, but played four of them against old friends that I hadn't seen in about two years.  Crazy times we're living in.   I did get a few items painted up for a great event hosted aboard the USS Hornet in Alameda, and hope to attend another event there planned for the spring.

Besides a handful of random minis, my largest purchase was about a dozen 28mm pirate figures that I hope to use for Ghost Archipelago, and a few dozen new (and used) Flames of War minis.  85 minis purchased/traded for/acquired in strange fashion vs. 7 painted, and a pair of 1/72 scale models sold brings me to a +76. Maybe I can get some Bulge Germans built in 2022? 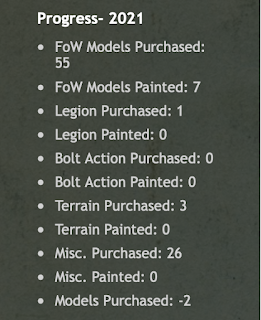 Posted by Richard Barnes at 9:47 PM No comments:

Six of us came to check out a newish shop (to us, anyways) and were able to get a few games of Flames of War in, 110 points of Late War.  I wanted to try out a Bagration Panzer IV list and Wyn had some US Armor.  We rolled up a Fighting Withdrawl with the Americans defending.  Nothing is painted yet, apologies!
Wyn was able to hold my attack off, though I feel like I had a chance.  I've never tried Late War armor before and thought it might be fun, and I wasn't disappointed! The game was pretty even, and if my troops could have unpinned I would have had a chance to capture the game.

Posted by Richard Barnes at 9:06 PM No comments:

I finally finished a Panzer III observer tank that I originally built and base-painted about 10 years ago.  I went ahead and painted a Sd. Kfz. 253 observer half-track too, just in case.  I'm not sure why anyone would take it instead of the tank though, since they're the same cost.

Posted by Richard Barnes at 6:39 PM No comments:

While I was in the mood to update my army for V4, I took the 3.7cm Pak36s from my Mid War army and rebased them too since they aren't an option anymore.  I moved the crew over to large bases and gave them some harder-hitting 7.5cm PaK40s.  All minis are metal Battlefront.

Posted by Richard Barnes at 6:27 PM No comments: